The Sahara Desert, one of the greatest natural spectacles that exist on earth. ” Sahara ” of Berber origin means hard earth, unusual due to its absence of water, although the most curious thing about its drought is its proximity to groundwater since between 300 and 1200 meters deep is the Albienne Sea, the The largest underground lake in the world, which gave a green life to the whole area more than eight thousand years ago.
Ocher tones seem to spill from the sky impregnating everything around him, while the horizon is painted by the light brown color of the sand. 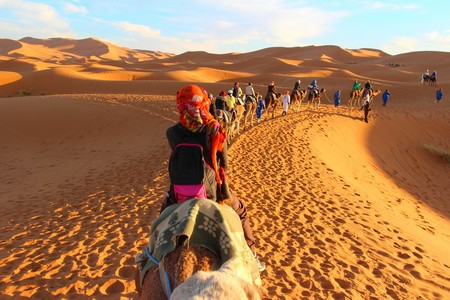 The desert is made up of countless stories, legends and stories that the Berber people tell us when we enter their warm sands, which help us to understand some points of Moroccan culture:

One morning, Shertat was inside a tent (typical nomadic dwelling) accompanied by his mother-in-law; They were talking about the tasks, the weather … It was a year of drought, “shida” for the Saharawi, where food was scarce and livestock died, so there was hardly any meat, milk and butter.

Within reach of Shertat was an empty plate, in which the mother-in-law had entertained him with a rich meal. The mother-in-law got up to leave the tent and say goodbye to Shertat. But without realizing it, he dragged the empty plate, which was lying face down. At the act, Shertat got up and dealt a strong blow to the mother-in-law, who rolled her across the floor. And he shouted at him. “If my food had been on the plate, you would have spoiled it!”

This story in particular has a considerable educational weight for the Saharawis, because the figure of the mother-in-law enjoys great respect among families, especially between sons-in-law and daughters-in-law. Therefore, Shertat’s behavior is intolerable.

We can also rescue from this history a problem that characterizes that town: its climatic conditions. That is, in fact, the reason why the Sahrawis are called Bedouin, or “Al-Badw”. Over time, people were forced to create their own customs, traditions and rituals due to the climate of their territory.

For the same reason, their diet is based on meat, milk or butter; elements that are offered naturally by the desert and livestock. The milk, for example, is milked in a jar made with a trunk of the region, which is smoked to add a flavor especially valued among the Saharawis.

Traditional clothing is defined by climate. For women it is the “melfa”, a dress that they use for any occasion; however, dresses are different between young and adult women. There are also common melfas for daily life, and more elaborate, for special occasions. The men, on the other hand, use a blouse called “darrá”, which is usually blue or white, and they wear a black turban to protect themselves from the sun.

There is another element, made with products offered by nature and animals, which is also used to dress. It is the “faru” (a kind of lambskin blanket), very appreciated and used not only to cover itself, but as a saddle to mount the camels and as a prayer mat. The well-known mythological character Shertat has more stories to tell about his nomadic life, such as how he got a “faru” a cold and desert night.

These sands, have much to tell, many traces marked in the infinite dune grooves and is that as the American Paul Bowles said:

“No one who has spent time in the Sahara is the same as when he arrived. Here, in this entirely mineral landscape illuminated by the stars like flames, even memory disappears; nothing remains but the breathing itself and the sound of the heart beating. “

From Andalusia Experiences we invite you to Morocco, land of contrasts, diversity of landscapes, gastronomy, nature and a sum of cultural and human heritage out of the ordinary.

Morocco where nature leaves a free course to the imagination to lose yourself and dream among its sands.